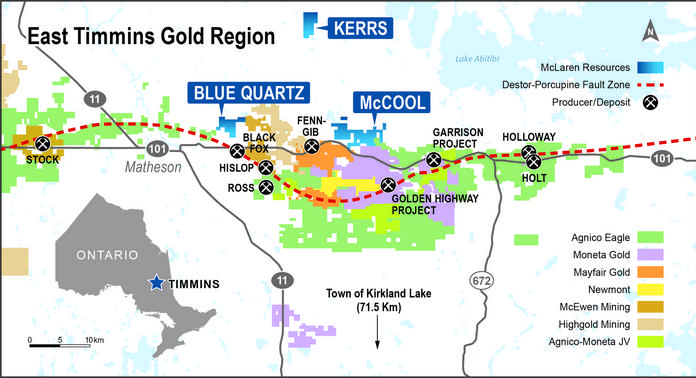 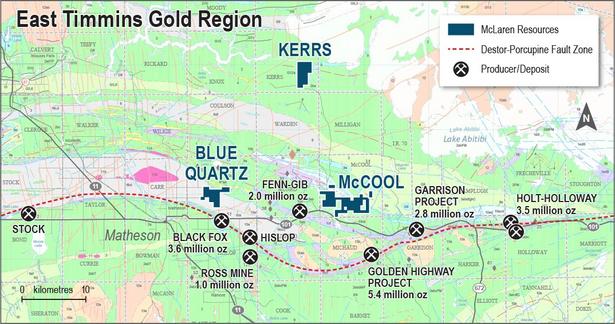 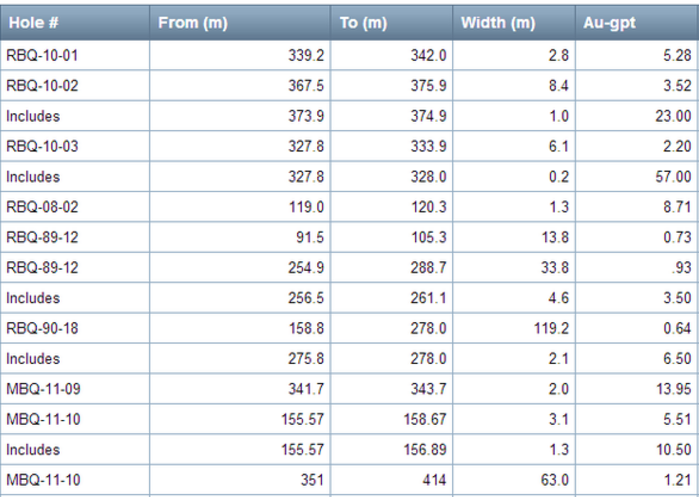 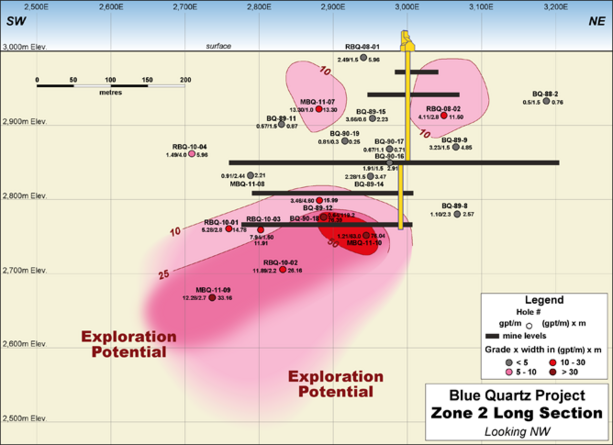 Blue Quartz Mine Property situated on the Abitibi-Greenstone Belt

General
The Blue Quartz Property is located in the Beatty Township (Ontario) 73km East of Timmins. Access to the property is excellent as a gravel road from Highway # 101 runs directly through the property. Situated on the Abitibi Greenstone Belt, The Blue Quartz property is surrounded by numerous past and presently productive gold mines. Most notably the Black Fox mine (McEwen Mining), the Hislop mine (Kirkland Lake Gold) and the Ross mine. In addition to neighbouring several mines and significant gold deposits, the Blue Quartz Property also neighbours the McCool Property 100% owned by McLaren Resources and the Kerrs Property 100% owned by McLaren Resources. See the 43-101 Technical Report.
Ownership
The 640 hectare 100% owned Blue Quartz Property consists of 25 patented mining claims having an area of 400 hectares and 8 adjacent mining claims having an area of 240 hectares.

History
Gold was first discovered on the property in 1907. The Blue Quartz mine was reported to have been produced in the 1920s and 30s from underground mining operations from the 514-foot deep mine shaft, including 6000 feet of crosscutting and drifting, over half of which was on the 500 foot level and lateral workings, to a depth of 740 foot level. Recent drilling programs in 2010/2011 confirm a strong potential for discovery on the property.

Blue Quartz Property Geology
The Blue Quartz Property Straddles both the Pipestone Fault as well as a subsidiary sub-parrallel fault, the Painkiller Fault. The rocks along the trace of these two faults have been silicified and are anomalous in gold. Bedrock mapped on the project area is Early Precambrian belonging to the Abitibi Greenstone Belt.
January 24, 2022
McLaren Intersects 16.5g/tAu over 6m,
10.8g/tAu over 9m, 7.9g/tAu over 4.5m
on McCool Gold Property