The McCool property is underlain by a sequence of ultramafic to mafic volcanics with intercalated felsic volcanic and interflow sedimentary rocks.  Intrusive rocks in the area include the McCool Hill Complex, a large layered mafic-ultramafic sill, small felsic syenitic stocks, a distinctive (and often anomalously auriferous) porphyritic biotite syenite dike, and narrow (generally less than l m in width) biotite lamprophyre dikes.  This geology has been deformed by the McCool synformal structure, and strained by the Centre Hill Fault.  This fault is a complex, anastomosing network strain deformation in excess of 300m wide.  In close proximity lies the junction of the Contact, Pipestone and Porcupine Destor Deformation Zones which have been intruded by a series of felsic and mafic intrusives and overprinted by a series or structural linears.  Hydrothermal alteration is pervasive throughout this geologically and structurally permissive area with gold mineralization on the property associated with quartz veins hosted in strongly altered volcanics and syenite. 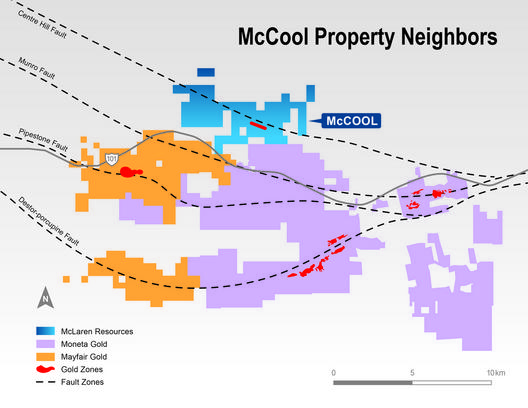 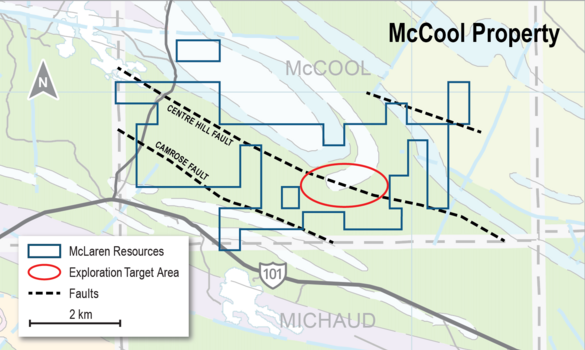 The McCool Property is a 1650 hectare Mining Lease (4077 acres), located in the southern portion of McCool Township, east of Timmins, Ontario, with Highway 101 situated on the south boundary of McCool Property. McLaren Resources holds a 100 percent interest in the property.

Several large gold deposits are located proximal to the 100% owned McCool Property including the Fenn Gib Deposit property 3km to the west and the Golden Highway project property adjacent to the south boundary of McCool Property. The Back Fox Mine is 15km to the west and the Holt Mine Complex is 20 km to the east. Numerous significant gold deposits are situated along the Destor Porcupine Fault Zone which is the key east-west geological structural feature which trends east through the Timmins District to the province of Quebec. 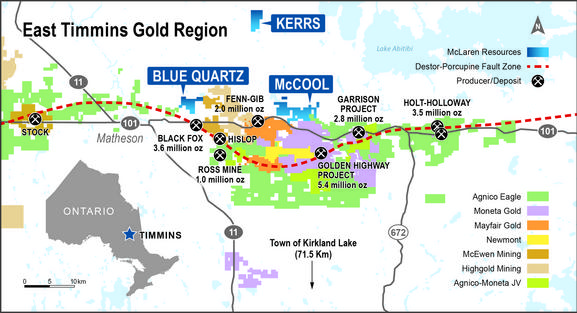